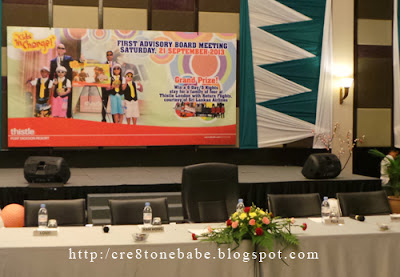 A panel of six judges,
Had the unenviable task of...
Sifting through hundreds of applications..
To shortlist 16 finalists...

A rigorous round of interviews...
Was subsequently held,
With the finalists....
Before 10 winners...
Were selected...
To make up the very first.....
Kids In Charge! Advisory Board..... 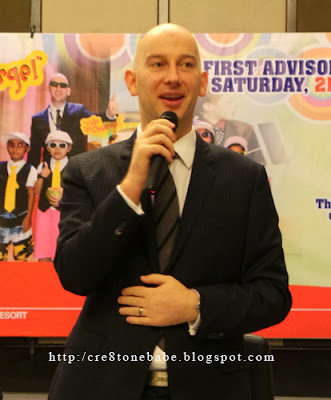 "After launching the call for applicatioins,
We're encouraged by the support..
Showed towards this initiative,
Not only by the kids,
But their parents as well....
Indeed,
We truly believe this is an excellent opportunity,
To expose children to the 'real world'...
Which will not only help them,
In their future,
But even boost their confidence,
And thinking skills,
Which will be beneficial..
In their current academic,
And co-curricular activities...."
Said Mr John Murphy,
General Manager of Thistle Port Dickson Resort... 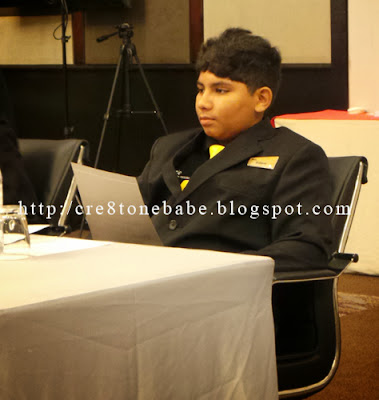 Both outspoken and active,
Adam has a special fondness,
In reading books by Jeremy Hilton and playing football....

He is also determined to make his mark in this world,
As a journalist or an auther....

Armed with creativity and inspiration,
He is confident in implementing..
Super cool ideas for Thistle Port Dickson...
But more importantly,
Getting kids to enjoy what kids should enjoy!~ 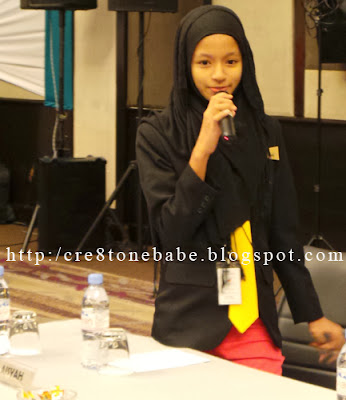 Aisyah dreams of becoming a doctor,
To help save lives following a personal incident,
Involving her grandfather when she was still a child....

An avid swimmer,
Aisyah took up swimming when she was 9 years old,
And she's a member of the Supersharkz Swimming Club,
At Shah Alam Aquatic Centre...
She plans to progress into competitive swimming in the near future...

As a music fan,
She's taking up piano classes,
To improve her musical capabilities...
Articulate and soft-spoken,
She loves reading English books..
A passion for baking has led her,
To create delicious chocolate brownies,
And chocolate chips cookies..
- A 'Must-try', according to her father... 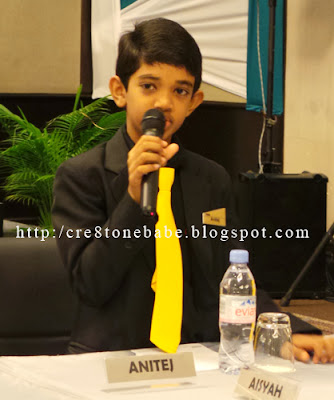 Young Board members, Anitej Palur, Aged 8,
From ELC International School...
Hails from Sri Lanka,
Is a firm believer,
In achieving excellence,
In all that he does...

Anitej has developed a love,
For Roald Dahl and Jeff Kinny's writings,
And is a fan of the adventures of Tintin...

Even at his young age,
He desires to pursue medicine,
Following in the footprints of his parents... 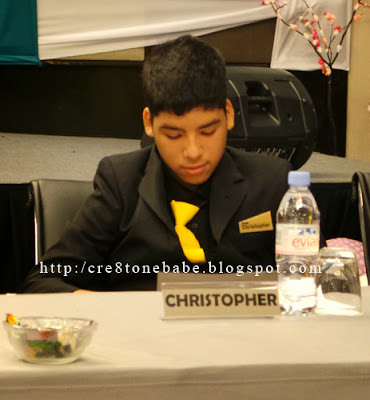 His ability to be witty at times,
Most unexpected has captured the hearts of many.
He has developed a set of well-rounded hobbies:
Playing tennis and computer games...

Believing in the liberty of kids,
Chris, who hopes to become a businessman,
Is confident in introducing wacky ideas,
To turn Thistle Port Dickson Resort,
A kids' heaven!~ 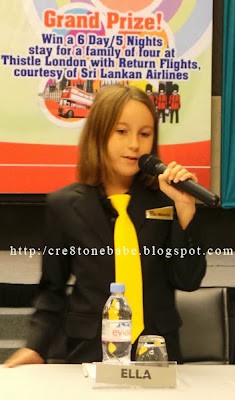 Ella Morris, 8 years old,
From Alice Smith School Kuala Lumpur.
Exudes an air of fun and cheer,
With whoever she comes into contact.
This friendly and easy-going young lady,
Aspires to be a designer for fashion and toys..
Being an art lover,
She indulges in various sorts of artwork...

Ella carries with her,
A soft spot for animals....
She currently has 3 dogs, a turtle and a hamster...
Her deep appreciation for culture,
Stems from her love for Irish dance.

Ella is also an avid swimmer,
And a member of the 1st KL Brownie Guides... 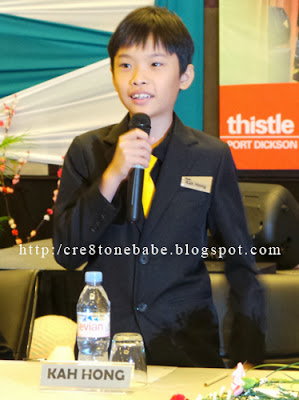 Kah Hong, with surname, Tan...
Who's 12 years old...
From S.J.K.(C) Pin Hwa 1..
His inquisitive and independent personality,
Once spurred him to learn how to play chess online..
And beat his mother at the game soon after!

Impressed by Dr Michio Kaku and Morgan Freeman's scientific TV program,
He has developed a love for science and seeks to explore and learn more,
By reading scientific comics and newspaper,
And by watching scientific documentaries on TV.

He plans to pursue his interest in science,
To become an astronomer in the future...
Which was evident in his suggestion,
To include telescopes in Thistle Port Dickson,
To allow the kids to enjoy and explore,
The vast space and stars.... 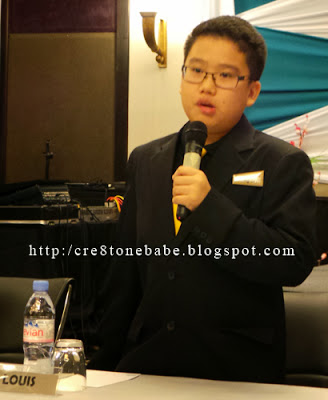 Louis, also known as Fong Jin, Aged 11,
From S.J.K.(C) Lai Chee...
His love for children has inspired him,
To become a pediatrician one day.
By achieving this dream,
He hops to share the love and affection,
With which he is showered with orphans and children less fortunate than himself...

Having been encouraged by his mother,
To think big,
This intelligent young man,
Has great plans for his future,
Which includes enrolling in the University of Edinburg -
One of the top three medical schools in the UK.

Louis believse in being an all-rounder.
He enjoys swimming and tennis,
To build up his physique,
While he drums to release stress,
And to gain inspirations,
Through the combination of various beats and sounds.... 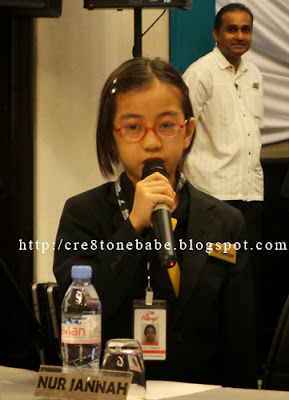 Nur Jannah Lee, 8 years old.
From S.J.K.(C) Subang..
Cheeky and bubbly,
She may seem reserved and shy at the first sight,
But her lovable and fascinating personality,
Does not take long to show itself...

This artist-in-the-making loves expressing herself,
Though creation of various arts and crafts,
Ranging from shoe boxes to aquariums,
UFOs to rocks,
Dinosaur fossils to cars and many more...
I'd really love to exchange ideas with her,
As I'm an art-lover, too!~

She wishes to develop this hobby into a career in future..
And hopes to become an artist to work on big and fascinating art projects..
Believing in keeping her options open,
She also hopes to become either a teacher or pediatric nurse... 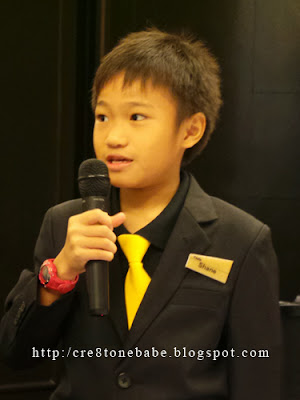 Shane carries a passion for swimming,
And spends most of his holidays by the beach or swimming pool....

His outgoing nature is also seen,
Through his active participation in school...
Where he is involved with athletics, basketball and Wushu.

Shane aspires to be either a hotel manager owner,
A doctor or a pilot... 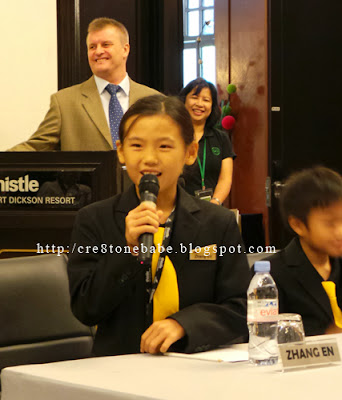 Zhang En's full name - Ng Zhang En,
Home schooled. 9 years old.
She's a poised an elegant young lady,
With a passion for art in the form of ballet and stilt walking..
Even at her tender age,
She can judge while stilt-walking
- A feat many of her peers can only dream of...

She aspires to become either a ballet dancer or environmentalist,
And has taken the first step towards realizing her ambition,
By being a vegetarian....

Zhang En believes that determination drives dreams,
To make them a reality..
She envisions Thistle Port Dickson,
As a spot with never-ending fun for kids...
Which I truly agree with her..
;) 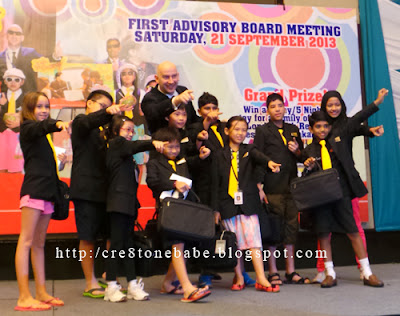 This is cool. One of the members is from my girl's school!

The finalists are all very out-spoken and very good in giving creative ideas.........