Recently,
Mummy's surprise because I actually told her,
The method of cooking!!!

Mummy must be wondering how I know lotus is for boiling soup!
Well,
I just know.....
I didn't just eat my everyday meal...
I observe a lot!

Mummy take out fishy from the fridge this time...

Mummy,
You see,
I don't just limit my vocabulary to cut and cook!
I tend to learn more through observation,
And listen to how adults talk!!
Posted by cre8tone at 1:20 AM 27 comments: 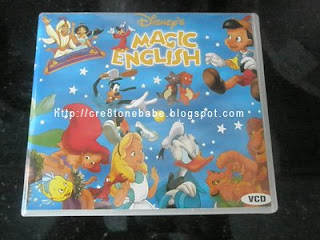 Mummy didn't remember she have this set,
While she's young...
Anyhow,
Wai gong found this set of VCD somewhere...

Disney Magic English!~
Time to learn,
With fun fun disney characters...
My favourite Mickey!!!
Posted by cre8tone at 2:30 AM 17 comments: 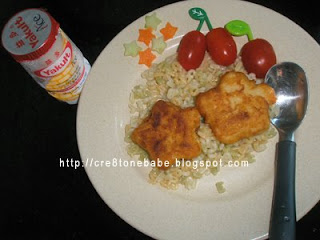 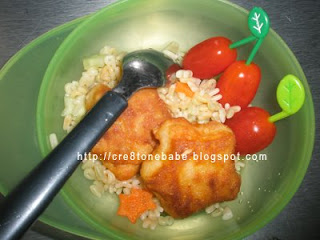 Mummy is wondering how I know,
We're suppose to use tougue tougue while kissing?
Posted by cre8tone at 1:38 AM 13 comments:

Another fun meals for me!~
ABC Pasta + Sea Animals + Chicky Family!
How wonderful! 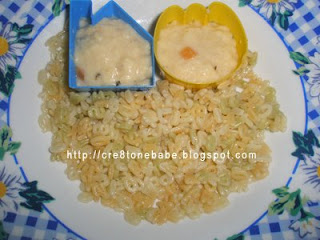 First,
Mummy boiled the ABC pasta,
Next she cooked the white sauce...
Mummy purposely don't add in the sauce,
As from her previous experience,
I always like plain pasta...
She just prepare the sauce,
In case I like it...
Well,
After I try one spoon with the sauce,
Still,
I prefer my plain ABC pasta! 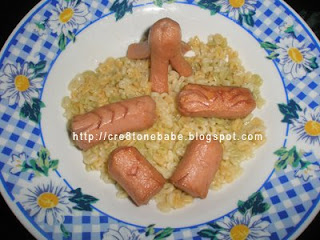 Next,
Is my collection of Sea Animals Hotdog!
Can you spot fishy, Penguins, crab and octopus? 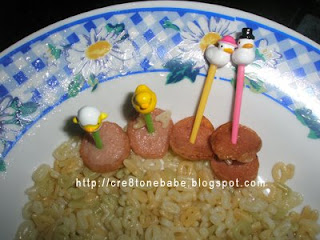 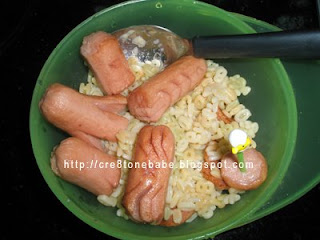 Mummy transfer all my food,
To my plastic bowl...
She plans to let me self-feed today!
And get ready to clean up the mess! 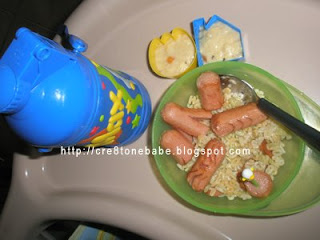 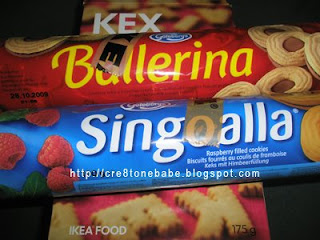 I request mummy to buy these biscuits for me...
Can't wait until we reach home...
I asked mummy to open the package and start eating...

On the way back,
Mummy open another pack of alphabet biscuit...
At first,
We thought it consist of A-Z,
But after we open it,
Only we realize,
It only consist of four alphabet, I-K-E-A...
Well,
Never mind,
I still can eat it...

Mummy handed me another perfect 'K'...
I continue eating~~~

When I reach home,
I refuse to eat all the biscuits...
The next day and the next next day...
I also refuse to eat...

Mummy: Why you don't want to eat?
I thought you like the biscuits?
Me: Why? Why?
Mummy: (Ask me back pulak...)

After several days,
I still refuse to eat the biscuit...
Well,
All the remaining biscuits,
Of course,
Goes to mummy's tummy~~~
Posted by cre8tone at 2:48 AM 12 comments: 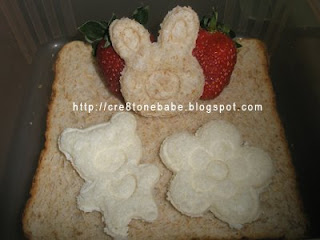 Using the same tools,
Mummy prepared cute bread for me...

As I like to eat the bread plain,
Without any jam,
Without any sauce...
Mummy feed me bread bread,
Together with my favourite strawberries!

I'm able to finish off,
One slice of gardenia white bread,
One and a half slice of gardenia full wheat bread...
Plus a quater cup of milo,
And also a few strawberries!~
My yummy breaksfast!
Posted by cre8tone at 10:57 PM 18 comments: 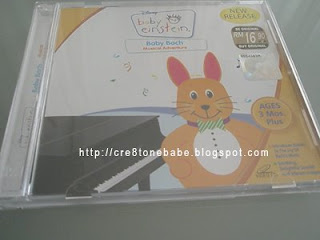 This is not the first time,
I listen to classical music...
Yet,
Mummy first time introduce me,
J.S. Bach,
Baroque music period famous composer,
And his great music!

Daddy bought this Baby Einstein series,
As a try if I like the visualize version,
Of all Bach's music!

Other than nursery rhymes,
And besides kids' songs,
I do like to hear classical, sometimes!
Posted by cre8tone at 10:16 PM 10 comments:

Since I show very positive feedback,
When mummy decorate my meals...
By 'sapu' the plate/bowl clean clean...
Motivates mummy to 'create' more,
Nice nice meals for me...
This time,
She prepared Vroom-vroom meals for me... 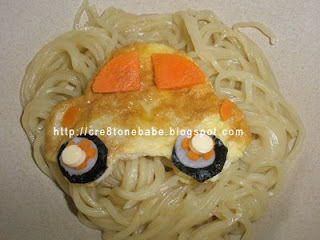 Lovely car car!
Mummy knows I love vroom vroom so much!
And now,
She turns car car into my meal!
How wonderful... 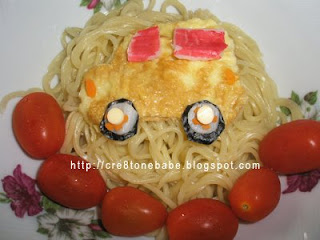 After finish prepare this one,
Mummy's wondering,
Is it a bus?
Or a van?
Or maybe a big mouth's fellow with colourful eyes?

Black and white?
You must be wondering what am I refering to...
Dang dang dang dang!!!
My new learning board: 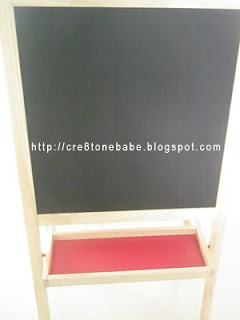 With the black side,
But daddy didn't buy chalk chalk for me...
And mummy said she prefer we used the white side.... 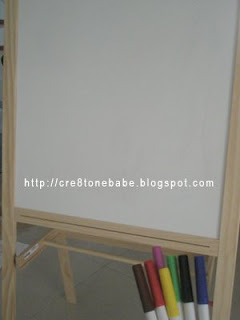 Time to write,
Time to draw,
Time to colour...
Time to learn what mummy and wai po teach....
Time to scribble around....

Mummy did asked the Ikea people,
If this board is magnetic...
The guy said Yes...
Yet,
When we bought this back,
And try to stick magnet on it...
It actually fells...
:(

Anyhow,
It's still a great learning tool for me..
The black board and the white board...

I stick the corner wooden part with lots of stickers...
It looks more colourful now!

I love to draw rainbow...
Using the colourful markers!~ 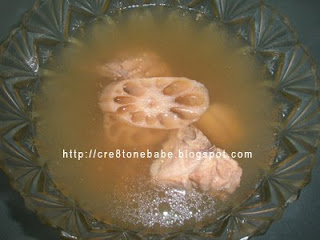 I love it when mummy kiss me...
And I think mummy loves to kiss me, too!

Every night before I sleep,
I'll ask for good night kiss...
Every morning right after I wake up...
I'll request for morning kiss...

Sometimes,
I won't even ask for kisses from mummy,
I'll just kiss her!

Mummy always feels on top of the world,
Everytime I kiss her...
I think my kisses have special power on her!
Which could melt her heart!

Mummy's tagged by Dora,
To do a fun personality test...

Here are the rules:-
1. Open this website : Personality Tests
2. Take the Personality Quiz (it’s VERY short and easy, really)
3. Copy Paste the result to your blog.
4. Tag as many friends as you can and link to the friend who tagged you.

Your view on yourself:

You are intelligent, honest and sweet. You are friendly to everybody and don't like conflict. Because you're so cheerful and fun people are naturally attracted to you and like to talk to you.

The type of girlfriend/boyfriend you are looking for:

You like serious, smart and determined people. You don't judge a book by its cover, so good-looking people aren't necessarily your style. This makes you an attractive person in many people's eyes.

Your readiness to commit to a relationship:

You prefer to get to know a person very well before deciding whether you will commit to the relationship.

The seriousness of your love:

The opposite sex finds this very attractive, and that's why you'll always have admirers hanging off your arms. But how serious are you about choosing someone to be in a relationship with?

Your views on education

Education is less important than the real world out there, away from the classroom. Deep inside you want to start working, earning money and living on your own.

The right job for you:

You're a practical person and will choose a secure job with a steady income. Knowing what you like to do is important. Find a regular job doing just that and you'll be set for life.

How do you view success:

Success in your career is not the most important thing in life. You are content with what you have and think that being with someone you love is more than spending all of your precious time just working.

What are you most afraid of:

You are afraid of things that you cannot control. Sometimes you show your anger to cover up how you feel.

Who is your true self:

You are full of energy and confidence. You are unpredictable, with moods changing as quickly as an ocean. You might occasionally be calm and still, but never for long.

Tagging Maggie...
Posted by cre8tone at 9:38 PM No comments: 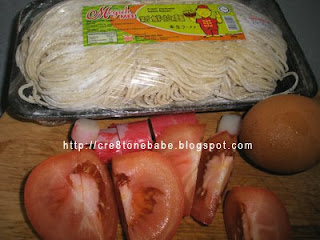 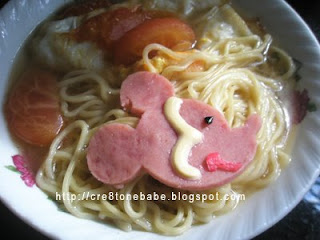 I looked at mummy,
With my sweetest smile.....
Mummy said I looked so impressed,
As if mummy is a super heroin,
Who is able to make anything possible,
Even making mickey mouse as part of my food!!!

Mummy's wondering if it's called a bento...
Well,
She didn't packed my meal to anywhere...
She just added in some simple decoration to my food...

I surprised mummy,
By knowing how to spell out,
The last alphabet of mickeY mousE... 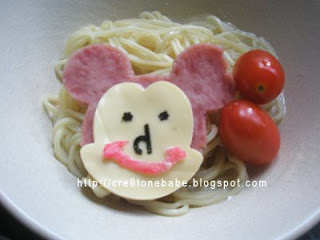 Mummy said she planned to use sea-weed as the black part,
Since it's mummy first time using the bento's tool...
She just realize that,
The mickey mouse cutter is unable to cut sea-weed...
She have to replace with another type of cutter,
Which, making the mickey mouse not so 'real' to her...
But, to me, it's just perfectly great!!!

Mummy told me it's really rewarding,
To decorate my meals...
As I finish it ALL!!!
Everything inside the bowl is now in my stomach!!! 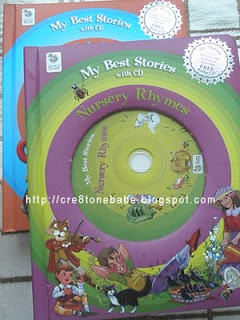 Such an impressive development!!
Mummy said I should be very proud of myself!
She's very proud of me, for sure!!!
Posted by cre8tone at 12:58 AM 9 comments: 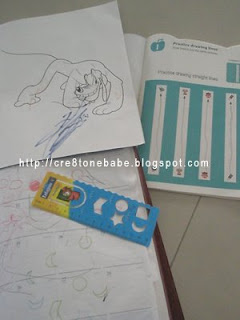 I'm not really into colouring yet...
I prefer to write and sribble freely,
Instead of colour within the lines... 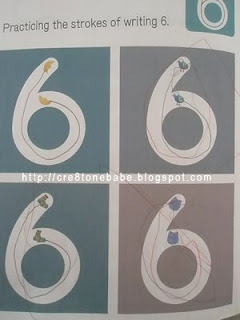 Do you still remember my numbering board?
Mummy said I'm progessing very well,
As I'm able to recognize the numbers 1-10,
And put it in the correct space,
After 2 weeks of practicing...

Now,
Mummy and wai po start teaching me to write in a book...
Still a lot more to improve in my writings...
Anyhow,
I'll get better and better day by day!
:)
Posted by cre8tone at 10:31 PM 11 comments: 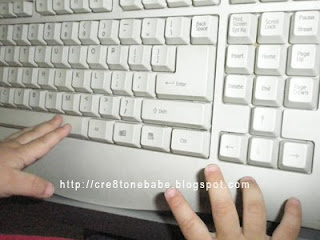 I love 'typing' on the keyboard...
I like to browse mickey mouse's webbie...
And some other educational website mummy introduced...

Sometimes,
I chat with aunty maggie...
Anyhow,
I'm not very sure,
If she understand 'my language'... 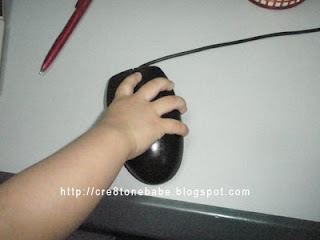 I like to grab & control my little mouse mouse!

Oh!
And not to forget,
Updating my blog!
hahahahaahahha~
Well,
Of course,
With mummy assistance....
Posted by cre8tone at 2:23 AM 19 comments:

Email ThisBlogThis!Share to TwitterShare to FacebookShare to Pinterest
Labels: Little IT Expert

Would like to thankx everyone who vote for me,
In cutiebubu's little model contest...

Yeah yeah!
Can buy new clothes for myself!