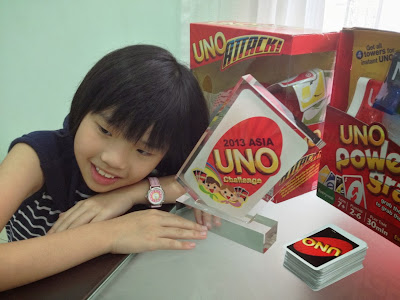 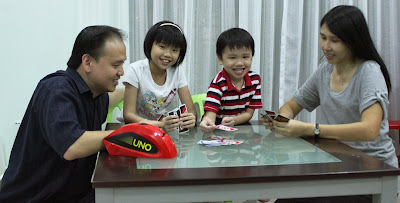 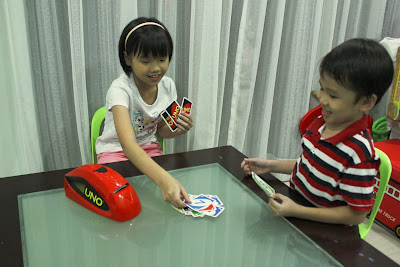 Following her win as Malaysia’s First Numero UNO®,
The time has finally come for our nine year-old national champion
To take flight and compete in
The Asia UNO® Challenge Grand Finals
This November in Tokyo, Japan.

With the grand finals set to take place on 3 November 2013,
The unassuming and soft-spoken young lady
Has been practising hard behind the scenes with her family and friends
To be able to give her best at the competition.
For the Koh family however,
UNO® is more than just a competition.
The game has played an integral role in their family’s social and bonding routine.

“We are incredibly grateful for this privilege
That the Asia UNO® Challenge has given to us.
It has been an eye-opener,
As often times we are swept away by modern technology
Where we neglect the true essence of real interactive play.
As a family,
We try our best to make it a point to spend some quality family time
Over a game of UNO®
As it encourages physical and intellectually-stimulating interaction,”
Said Rachel’s father, Dr. Koh Lee Min, a paediatric specialist.

Aside from regular UNO® nights with the family,
Rachel tries to spend at least half an hour a day
To practice the game with her little brother Zachary, who is five – another rising UNO® star and Rachel’s regular UNO® “sparring partner” –
In anticipation of the upcoming grand finals.

“I am nervous of course,
But at the same time, really excited,
As I do enjoy a good game of UNO®.
I am also really excited to explore Japan with my family
And to just have a good time,”
said Rachel when asked of her thoughts on the approaching competition.

Rachel’s first major exposure
To the game was during the UNO® Challenge preliminary rounds
At the Putrajaya Hot Air Balloon Fiesta event back in March.
Little did the family know that
The encouragement from her mom to accept the challenge
Then would take Rachel on a life-changing and edifying learning experience.

“Since being crowned Malaysia’s national UNO® champion,
We have seen Rachel’s confidence level built in participating in more competitions.
We are incredibly proud of her,” said proud mom, Ms. Ang Chiew Hooi.

Rachel will compete with seven other national UNO® champions
From Japan, Korea, Singapore, Taiwan, Indonesia, India, and Hong Kong,
Paving a way for Malaysia as she stands a chance to be Asia’s Numero UNO®.

The Asia UNO® Challenge was an initiative to highlight positive UNO® brand values,
Which are to educate and nurture children,
As well as to serve as an ideal platform for families to interact
And bond through this family friendly, fast-paced yet simple game for all.

“We are really moved to see how a simple card game such as UNO®,
Is able to help bring children out of their shells and build confidence through meaningful play.
This is one of many reasons why Mattel continues to design and create the future of play,”
Said Ms. Petrina Kho, Commercial Director of Mattel Southeast Asia.

“We believe that UNO® has a magically universal appeal to all generations,
Bridging cultural boundaries.
It is through the Asia UNO® Challenge,
That we hope to bring back more interaction between children and their families,
Strengthening family bonds through a fun game of cards -
At the same time,
Helping children develop greater strategic and communication skills at an early age”,
Added Ms. Petrina Kho.

UNO® is an all-time family favourite that promises ‘Fast Fun for Everyone!’TM.
It is a classic fast-paced card game that is loved by adults and children alike
Because it is easy to learn and fun to play.

Traveling to a competition at such a young age would be invaluable to her personal development. I didn't manage to go that far (just inside the country) but it was very memorable.

Good luck to her in Tokyo! I bet she'll beat me at Uno with both eye closed.

I used to love playing UNO during school days. These days I've forgotten how to play it!

Merryn, I love it too! It's still in my mind until today... Still can remember how to play!~