Didn't really plan to go EnfaCamp, actually...
Happens to shop around in Sunway Pyramid
And we notice there's lots of crowds and saw EnfaCamp...

I'm having so much fun in the little camp~~~
Lots of toys for me to play...

My first stop was playing colourful lego-like-blocks...
I see many kor kor and jie jie building many things from the blocks,
But I don't know how to build any yet...
I just grab the two of the block and don't want to let go...
Even mummy said she's going to bring me to another area for playing,
I still want to hold the block~~~
When mummy want to get it from my hands,
I scream and scream...
Mummy, I want this!!!~~
Until everyone's looking at me!~
(Haha!~ Now I got everyone's attentions!)
Ok, daddy told the camp staff and now,
I'm allow just hold the block,
While mummy bring me to the other area...

Wow!~
There's a lot more stuff to play here...
Little colourful musical items,
With different kind of sounds and rhythm~~~
And I just forgot about the previous block I hold!~
Ha!

I played and had a great time in the camp...
I saw many cute cute kids and baby around...
People-watching is always my favourite task!~ 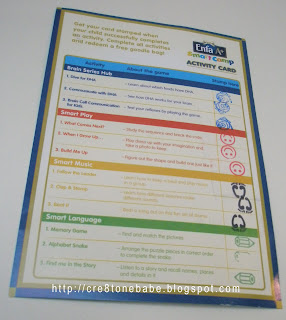 For every single task I complete,
Or should I said,
For everything I played,
I was awarded by the staff for little cutie chop!~
Just take a look what had I accomplished!~

Daddy took the activity card with all the chops to the counter,
And fill in a little survey with few questions,
We get a free goodies bag,
With the items in the photos: 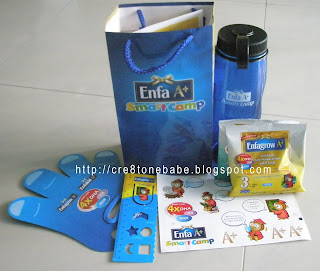 Nice hor, go play then get free gifts. :) So Little Prince, r u an enfa bb?

haha~ no wor... he's dumex bb... Dunno y he dun like enfa milk~
Since pregnant i try enfamama vomit out, then he born i let him try enfalac, dun wanna drink at all...

I oso surprise got many freebies.. hehe~

Hey, we were there too. But I arrived at noon. Is also an inpromtu to us as I wanna to meet up wit my mum there to pass smtg for her.

Clever little prince!!
So nice, so many freebies!!

Nice to stumble upon the camp, can play and get some freebies :D

lil monster, it's great that u can meet up with ur mum and went enfacamp... go 1 place, do many things~~ effective! hehehe

Hey, you're dumex kid then you can enter the dumex photo contest.